For discussion of other cellular automata.
Post Reply
2 posts • Page 1 of 1

I found this family of rules. Some of its members seem to exhibit self-replicating behavior.

4568/456/4: The basic c/2 ship in this family of rules evolves into a pattern that repeats its structure over time, sort of a spacefiller.

A simple 3x3 square self-replicates endlessly. Contained inside a square. The basic ship is faster than

4568/456/6: Nothing to see here, except for this bigger ship that will play an important role later:

This ship, similar to the basic ship, replicates itself, showing sawtooth-like growth and leaving a trail of basic ships behind on a Sierpinski triangle.

4568/456/8: The bigger ship works again, and will work for any c > 8. When c = 8, it is a basic ship backrake. A collision between two basic ships creates a new, really resilient 2c/17 basic ship frontal rake. This simple pattern shows it all:

I haven't found any interesting behavior for c > 8.
Top

Wow, those are quite some finds.

/4 further muddies what I had assumed might be a clearer distinction between replicators and space fillers, with that one pattern seemingly the only one that stays active which it does by forming more copies of itself, but not always the same way. I guess at one level, CA has always been about developmental path convergence. That rule just makes it blatantly obvious.

/5 is much more familiar replication. There is a 1D analogue in Life in a Tube:

I ran yours far enough to see that the growing square has a tendency to bulge at the middle, reminding me of a late adjustment we needed to make to the floor of a custom designed tent that we used nine months a year until the tent (not the floor) was swept out to sea in the unseasonal floods of 1983.

/7 makes quite some demo. With Hyperspeed and Auto Fit both on in took five minutes to show that Golly is bigger than the observable universe. 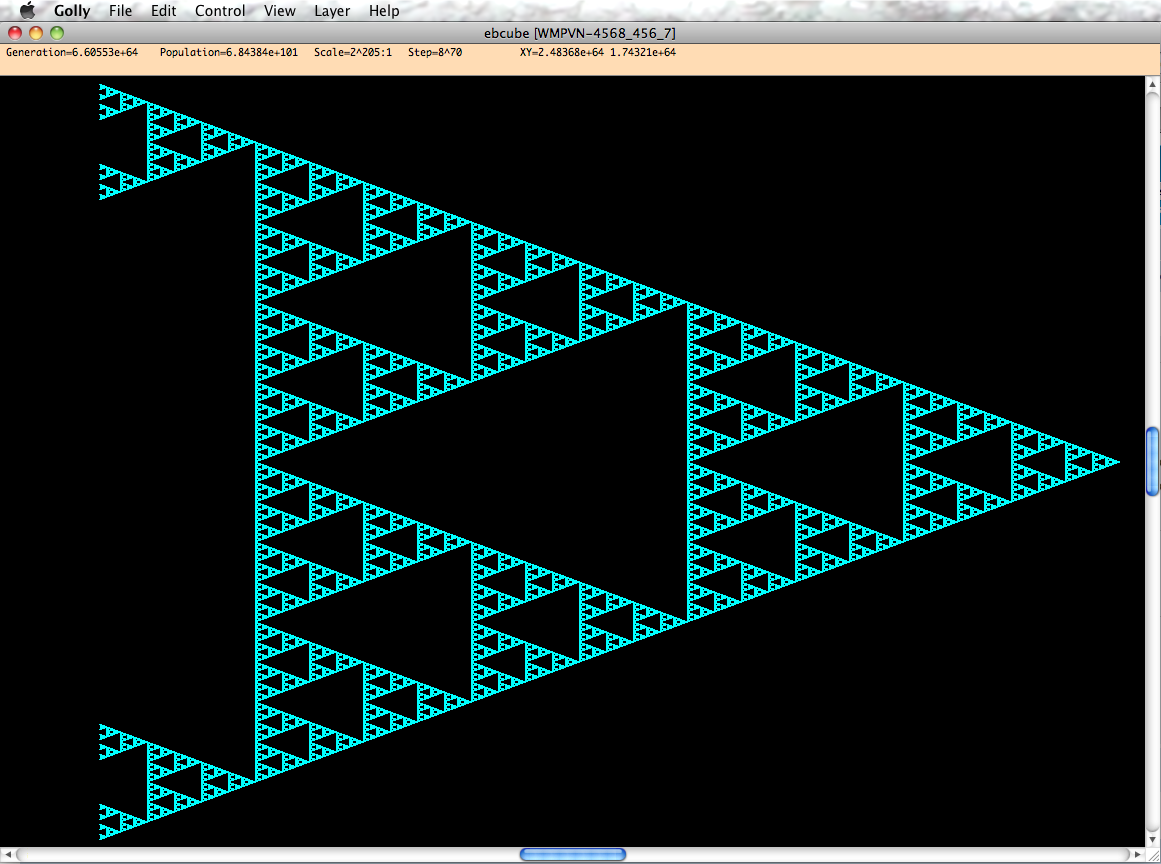 But we knew that. (Looks like that image is wider than the forum software likes.)

I've seen your small 3c/6 spaceship in other rules, sometimes along with more familiar c/2 spaceships.

Even though I've cut back to just my targeted corner of WMPVN rule space, it is the surprises that keep it interesting where simple mechanisms do surprising things. It looks like one of my computers will stay tied up for the next 2-3 months finishing running 50 viable seeds (to 80,000) with the previously mentioned replicator rule WMPVN 45678c/459abc/12. Meanwhile, just when I though I'd staked out the 16 families where the 13c/58 diagonal "flutterby" is dominant, at least for c>=16, two of those families turn out to be dominated by a trident and dependent burner for c>=13:

which makes for fancy patterns and a diversity of interactions but little chance of anything else emerging to over dominate.
Top
Post Reply
2 posts • Page 1 of 1

Return to “Other Cellular Automata”